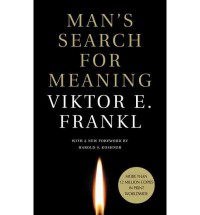 I have run across quotes from Vicktor Frankl's Man's Search for Meaning for a long time now. I see it referred to very often, usually in the context of considering a hopeless situation (i.e., many world events). Reviewers often refer to it as "life changing" and it remains one of the most popular books of all time.

So I finally got my own copy and I was greatly impressed. I'm not a big fan of modern psychology that sees people as no more than "brain containers," but Dr. Frankl saw (he died in 1997) beyond that, and his credentials were experiential and not just academic.

Dr. Frankl was a psychologist in Austria in the 1930s when the Nazis invaded. Though he had an American immigration visa and could have escaped, he chose to remain with his aged parents and so was arrested with them and the rest of his family. He then spent three years in concentration camps, mostly Auschwitz, until he was liberated by the advancing American army. His entire family (including his pregnant wife) died in the camps.

When Dr. Frankl was arrested (for being Jewish) he hung onto a manuscript he had been working on that was about logotherapy--a slant on psychology that he was the principal developer of, though others apparently contributed to its antecedents. Producing this book was his passionate project and he tried to hang onto the manuscript even though he knew it was hopeless in the face of prisoners having absolutely everything taken from them. He lost the manuscript but not his desire for creating the book.

In a nutshell, he found the strength to endure the unimaginable horrors of the concentration camps from his sense of living for something more than himself. This sense included his desire to reunite with his wife (he didn't know until after the war that she had died soon after arriving at Auschwitz) and his desire to write his book. Of course, he didn't know that this was what was saving him until he evaluated his experiences afterwards, and his insights became Man's Search for Meaning (which was published under different names for different editions).

Dr. Frankl's insights gleaned from his time in the camps are the great value of this book. What he discovered about the meaning of life in the face of extreme oppression offers hope and guidance for anyone trying to cope with more common, day-to-day, oppressions. That hope comes from people finding a meaning to their lives, and Dr. Frankl tells us that it can be found in three ways:

(1) by creating a work or doing a deed; (2) by experiencing something or encountering someone; and (3) by the attitude we take toward unavoidable suffering.

This indicates why pilgrimages can be such powerful bringers of insight. The thing to note about these three ways is their external nature. That is, they are a response to outside stimuli even if that stimuli is deliberately engaged (such as deciding to hike the Santiago de Compostela Camino). This leads to a central tenet of Dr. Frankl's:

I can amen that in my life many times over. It's basically "trying too hard" and can even be compounded by hubris. Dr. Frankl goes on to emphasize this point:

The more one forgets himself— by giving himself to a cause to serve or another person to love— the more human he is and the more he actualizes himself.

When people don't have something or someone to live for, they can come to a point of questioning what they are indeed living for. "What's the use?" is the question they want to answer but can't. Dr. Frankl calls this state an "existential vacuum." He says:

The existential vacuum manifests itself mainly in a state of boredom.

This can be a problem for workers and leads, in my experience, to job burnout. Dr. Frankl does not miss this and examines it in the light of people who have lost their jobs. The depression that results for them he calls, "unemployment neurosis." He says:

I was most interested in this existential vacuum that gripped the prisoner and the corporate worker in similar fashion. I think a useful study might be made between the psychology of the concentration camp inmate and the modern worker. Based on the insights of this book, I would say they share a common crisis and a common solution.

Dr. Frankl avers the solution lies outside the self. Meaning, he says, comes from the world (universe) and is not imposed upon it. It is the individual's responsibility to find that someone and/or something that to them is worth living for, and that is transcendent to everything else. Achieving this insight, will allow them to endure suffering when it comes.

There are so many insights to take away from this book! Most thoughtful people will find something in it that speaks to them. Man's Search for Meaning is not a long book, but is one to be savored, over and over, and digested. It goes a long way towards making sense of the world as we experience it, and offering insight to deal with it, more than most books I've read. It deserves its place as a world classic in self-actualization literature.

By his own account, Dr. Frankl survived the death camps through a lot of luck and fortunate (for him) choices made by those around him. I like to think it was a benign force for good that preserved his insights in the face of the most oppressive of evils for the sake of we in this age, who so desperately need it.