Gates of Fire: An Epic Novel of the Battle of Thermopylae 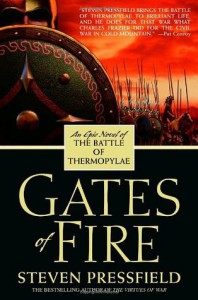 I generally don't care for stories that glorify war, but then, war is a large part of the human condition and so is a legitimate subject for examination. In Gates of Fire Steven Pressfield offers an engrossing account of the classical era battle of Thermopylae.

The facts of the battle are dramatic enough--300 Spartan warriors with a few thousand allied troops withstood for seven days the onslaught of the invading Persian army numbering in the hundreds of thousands (or two million by ancient accounts that, while dramatic, aren't considered reliable). Pressfield fleshes out these basic facts along with the account of battle by Herodutus, into a compelling tale of heroism in the face of insuperable odds.

Pressfield's story is told by Xeones, a surviving member of the Greek defenders. He is the young squire of the Spartan knight, Dienekes, and is taken from the battlefield by the victorious Persians to recount his tale of the defenders for their king Xerxes. In doing so, he tells his own tale of woe and destitution that brought him into Spartan service. His story brings in that of the other principals of the battle, including Dienekes, Polynikes, and King Leonidas, as Xeo's life touched theirs. In this telling, the reader gets a wide-angle view of life in classical times, with all it's desperation, cruelty, and rural simplicity. It's a view through the eyes of a host of sympathetic characters that draws in the reader so that we care about these people's fates, even through the inevitable loss of the climatic battle.

This interweaved story of individuals, with all the loves and hatreds between them, is what makes Pressfield's novel so much more than a mere military history or the recounting of a battle. Some reviewers have been critical of the "lofty" language Pressfield uses in his dialogue, but I don't believe that's a warranted criticism. Reproducing classical speech requires that or it just doesn't work. Maybe Shakespeare just set the bar that high, but the dialogue in this book is still less Shakespearean than the Starz Spartacus series (and it works very well in that series). I think it enhances the satisfying depth of storytelling with historical fact that makes Gates of Fire the definitive retelling of the battle of Thermopylae, as opposed to the idiotic, video game ripoff film, 300.

As I said, I don't care for stories that glorify war, but I don't think Gates of Fire glorifies war so much as it does the Greek warriors that fought at Thermopylae. Pressfield doesn't shrink from showing the horrors of war--the lawless brutality and the appalling mechanics of fighting that requires the enemy to be hacked to death. In that regard, the story echoes Shakespeare's Henry V in depicting war as a multi-faceted thing (Shakespeare does it better, but no indictment of Mr. Pressfield).

Gates of Fire works as a historical novel and I highly recommend it for its sense of history and sympathetic characters. And I think it would make a great movie.